Visalus Project 10 Winner Terry Wygal, of The Workout of The Day, Wins $1,000

How Terry Lost 10Lbs in 2 Weeks 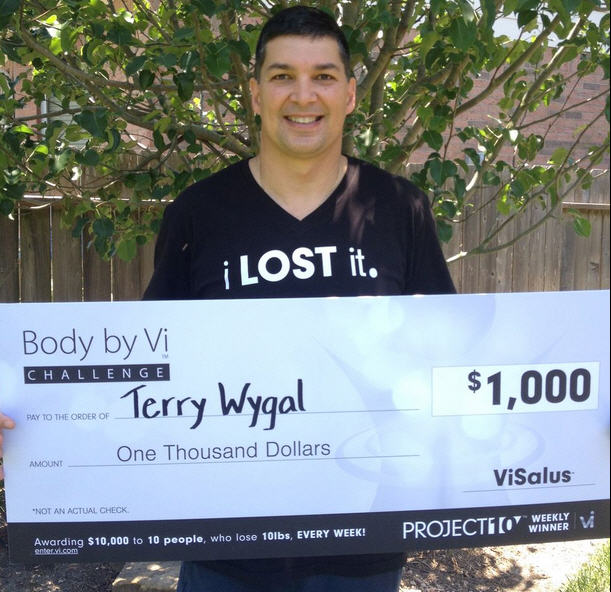 You start a diet because you realize, after 20 years of not doing anything, you are rapidly approaching the later parts of your 40's – and you are REALLY out of shape.

And you have a Spare tire around you're waist that is – well – BIG!

And more importantly – you find reports that tell you that Obesity Kills More People Each Year Than Cancer AND Automobiles Combined!

“By 2015, 2.3 billion adults will be overweight in the world, with more than 700 million of them obese, according to the World Health Organization. As a result, deaths caused by diabetes will increase more than 50 percent during that time.”

Then – even MORE Shocking to my System Was This bit of news from Fire Engineering:

So – What do you do to Lose Weight AND Inches off your tummy QUICK?

Well for me it was simple – I started walking Diesel, my Husky.  Here is kind of an outline for what we did:

1. We started doing SOME sort of Physical Activity.

For me it was walking the dog for 2 miles,

then heading back to the gym,

then setting a Goal to do a 5k Run,

then a Tough Mudder.

Olivia, my daughter, did similar things – started off stretching, then getting back into Yoga – then picked up Kettlebells.

2. We supported each others eating habits – she and I and my wife, her Mom, fix up meals for the Weak – and stopped bringing a lot of crud into the house.

3. We both started using the Visalus Science Shake Mix, I am a Rep with the Company now, as our Meal Replacements that helped us lose the weight and get back to were we are now.
(Olivia has now gone Vegan and does not add the Visalus to her shakes)

We eat anywhere from 4 to 6 meals a day to get our Metabolism kicked into High Gear.

4. We don't sweat the Cheat Days – we just get right back into it the following day – we actually Scheduled a Cheat Day

5.  I drink a Visalus Shake within the first 30 Minutes of waking up – it curbs any hunger pains from over night, and fills me up so I don't attack everything in the fridge.

6.  I set goals for a 90 day time period – REASONABLE Goals. And I keep track of where I am – as does Olivia

I also entered the Visalus Challenge so I could have a FIRM Goal.

When Visalus started the Project 10 Challenge I had already lost 20 Lbs – so NOW I had to push myself to lose an ADDITIONAL 10 Lbs.

Now – what were some of the workouts I did?  What did I eat – How easy or Hard was it?

Terry Wygal Husband, Daddy, New Grandpaw (Dado) and Fire Fighter - Serial Entrepreneur with strong ties in the Real Estate, Internet Marketing and Health Related industries. Married 22 years and the Father of 3, In his spare time Terry is out protecting his Community as a Fire Fighter for the last 11 years or so. http://HealthandFitnessUpdates.com and http://TerryWygal.com
View all posts by Terry Wygal →

Training & Nutrition Insider Secrets for a Lean-Body, by Mike Geary (a $17.99 value):

This ebook, created by Certified Nutrition Specialist & Certified Personal Trainer, Mike Geary, details over 27 specific metabolism-boosting secrets that you can use to strip off your stubborn body fat faster and easier. Contains unique workout methods and nutritional strategies to slash body fat and take your body to a whole new level of leanness.

Disclaimer: Before You Start Exercising or Dieting Talk with your doctor before beginning any exercise program. Do not exercise if you have any physical problems that might influence your ability to become more active. Stop exercising and call your doctor if you feel dizzy, nauseated, short of breath, or if you feel pain in your chest. If you are more than 40 pounds overweight, you should not work out at a high intensity level without professional supervision. Before Starting a Diet - If you are taking medication or have a medical condition, you are strongly encouraged to take any suggestions to your physician or dietician for review. Modifications made by health professionals are your responsibility and should be taken very seriously. We Are NOT Making Any Medical Claims or Weight Loss Or Health Guarantees - these are things that worked for me or others who wrote the articles. There is no way for us to know each and every person and their Specific Health conditions. So Get A Check Up!
Privacy Policy | The Affiliate and Compensation Disclosure | Copyright | No-Spam Policy | Terms Of Use | Contact